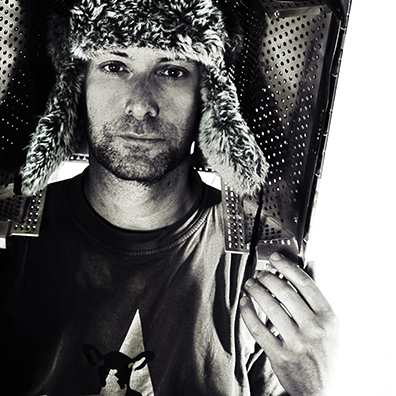 Andy Levy aka Dolphin Boy has been a producer and DJ for more than 20 years, and in that time he has pulled off the neat trick of evolving and innovating whilst his early work remains as fresh as ever.

His public debut was as part of Artistic Upstarts, an alternative performance showcase staged in a contemporary art gallery in 1994. “It was all quite primitive,” he remembers. “I had a turntable, a CD player, a tape deck and some kind of basic mixer, but I instantly got a taste for it. Just being able to play some of the music I’d been making at home on cassette, and having people dance to it – that seemed quite remarkable to me.”

Dolphin Boy was soon providing a well-known laid-back sound around the Edinburgh club scene: he was a regular at The Venue, La Belle Angele and the Bongo Club amongst others. Almost inevitably, he caught the attention of Tummy Touch Records in the early 2000s, releasing the highly collectable, limited edition 10″ singles for Shake It Loose, On The Ceiling and Handsome As Ever. Then in 2003 he released his first album Gateaux Youth. Its spaciously layered blend of slinky grooves, potent melodies, quirkily sourced samples and custom-recorded vocals won glowing reviews in the clubland press. Tracks and remixes from this release found their way onto numerous chilled out compiliations and ten years later it is still considered a classic.

In terms of mood, Gateaux Youth is one of longing. The grooves are deep, and each track has a drifting quality lonely as it is stirringly sensual … the combination is perfect.
Properly Chilled

Meanwhile, back home in Edinburgh, the seeds of Dolphin’s second album, Vertical Variations, were already being sown. The Scottish capital has long been renowned for the melting-pot nature of its music scene – jazzers, folkies and DJs frequently rub shoulders in the same bars and clubs, giving rise to a wealth of cross-fertilisation across different genres. With the emergence of acts like Shooglenifty, Croft No. Five and Martyn Bennett variously uniting elements of folk and dance music, the reciprocal evolution of Dolphin Boy’s sound transpired more or less organically.

It is club music with a Celtic twist, but done with a rare elegance and style, an infectious combination.
Andy Letcher on Vertical Variations

Not surprisingly Dolphin Boy increasingly became known as the folkies’ DJ of choice and following Bennett’s untimely death in early 2005, his powerful remix of his composition McKay’s Memoirs was released together with the original orchestral version, while a subsequent collaboration with jazz saxophonist Phil Bancroft on another Bennett piece, 4 Notes, was premiered to rapturous applause at a memorial concert in 2007.

DJ Dolphin Boy is a unique entity. He has been an integral part of the positively evolving music scene in Scotland over the last 20 years and has also become one of Scotland’s favourite DJs and remixers. His open-minded musicality and ability to make even the folkiest of dirges sexy means he’s loved by the folkies and jazzers as well as by the hardcore clubbers on the dance floor. Hail Dolphin Boy. We love you you genre busting beat freak!
Aidan O’Rourke (Lau, Kan)

Since 2001, Dolphin Boy has played annually at the Isle of Eigg Anniversary Ceilidh, a justly celebrated mini-festival staged to commemorate the islanders’ community buyout of their tiny Hebridean homeland in 1997.

“As a Scottish DJ, I suppose the normal ambition would be to end up heading south and playing big clubs in London,” Levy reflects. “But I’ve ended up going in the opposite direction a lot of the time, playing all these tiny wee halls in the Highlands and islands, which is great – the audiences up there are really open-minded, they’re just up for having a good time, which gives me a lot more freedom with what I play. It’s the total opposite to that jadedness you sometimes get with big city audiences – everyone hung up on the latest cutting-edge whatever. There’s something really nice about playing to crowds where there’s kids and old folk and everybody in between – it feels like being part of a tradition.”